My creative beginnings are not to be found in the field of embroidery, but rather in knitting and sewing as a child. Like many of us, I was initially taught basic skills by my mother and grandmothers, but from an early age I remember being largely self-taught – always motivated to make things, using books and anything else I could lay my hands on. I began knitting at four years old, and embroidered oven cloths out of potato sacks (hessian)  every year for family presents which became more and more elaborate. I also enjoyed knitting and sewing dolls’ clothes and also clothes for myself, adapting patterns and making things up as I went along.

In the late 1990s, with young children at home, I was looking for a hobby. I dabbled in painting for a while, but still did not really find anything to focus on. Then I came across Jane Nicholas’ wonderful book ‘Stumpwork Embroidery’ and my embroidery journey began. Jane's book really captured my imagination, partly because of the embroide​ry and partly because of the history it encaptured. I became fascinated by many aspects of Elizabethan work, the style of embroidery, the beautiful objects created such as caskets. I found that embroidery was the ideal hobby I had been looking for – it could be done at home, it could be used to decorate clothing for my children,  and it could be done at very little cost.  I went straight into Jane Nicholas’ book, adapting patterns as I went.
By 1999 I wanted to learn more and heard of  an upcoming week long international embroidery conference to be held in Auckland -Embroidery 2000   and decided to take a class by Shirley Holdaway on Elizabethan work.  Although the class was an advanced one, and I had very little experience, I loved it. 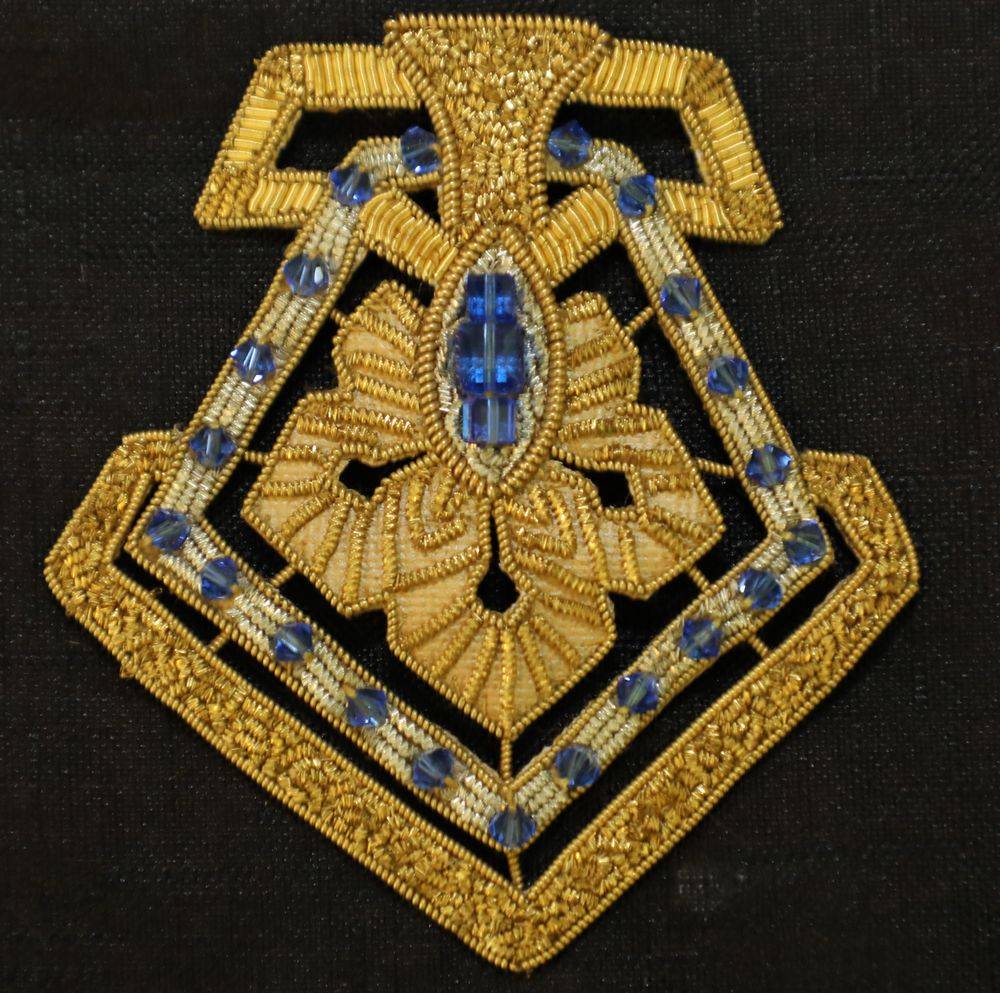 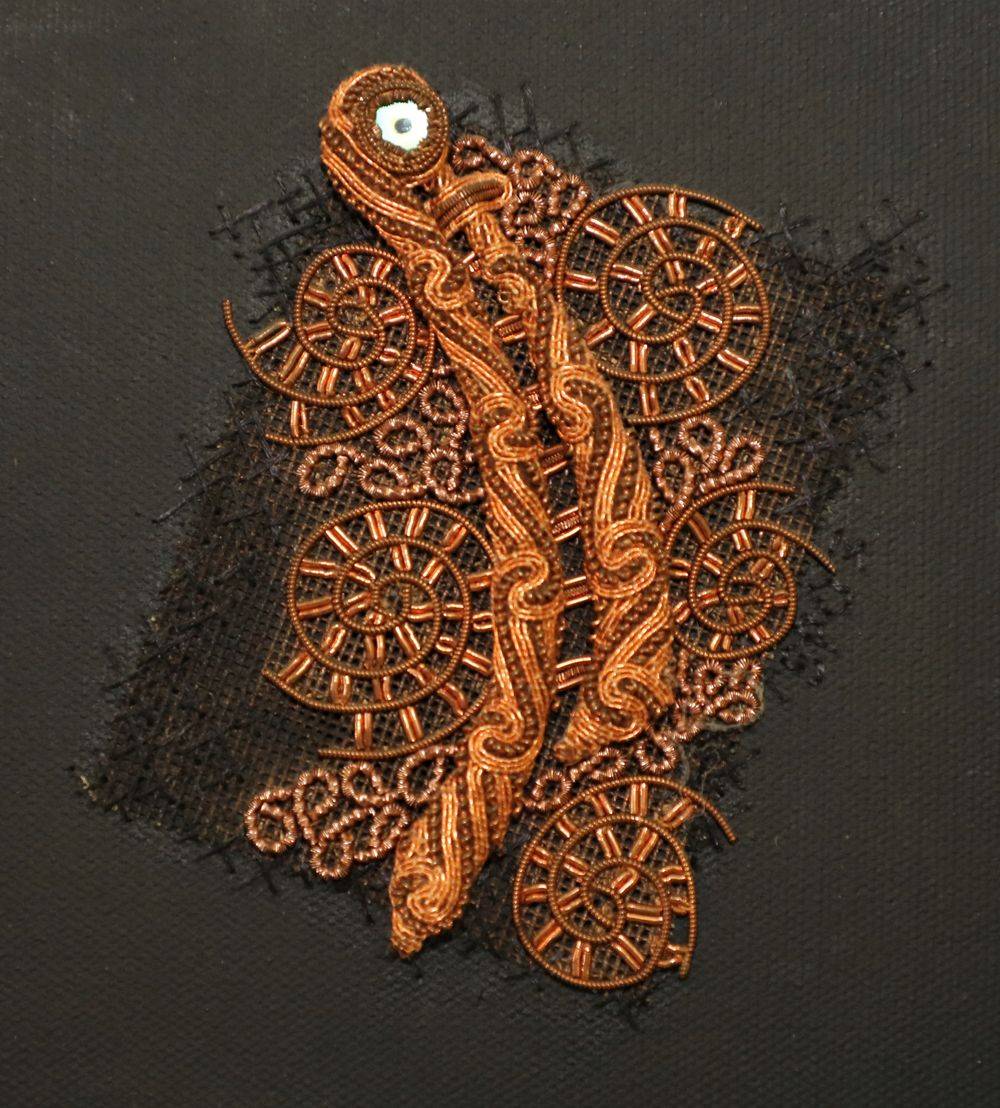 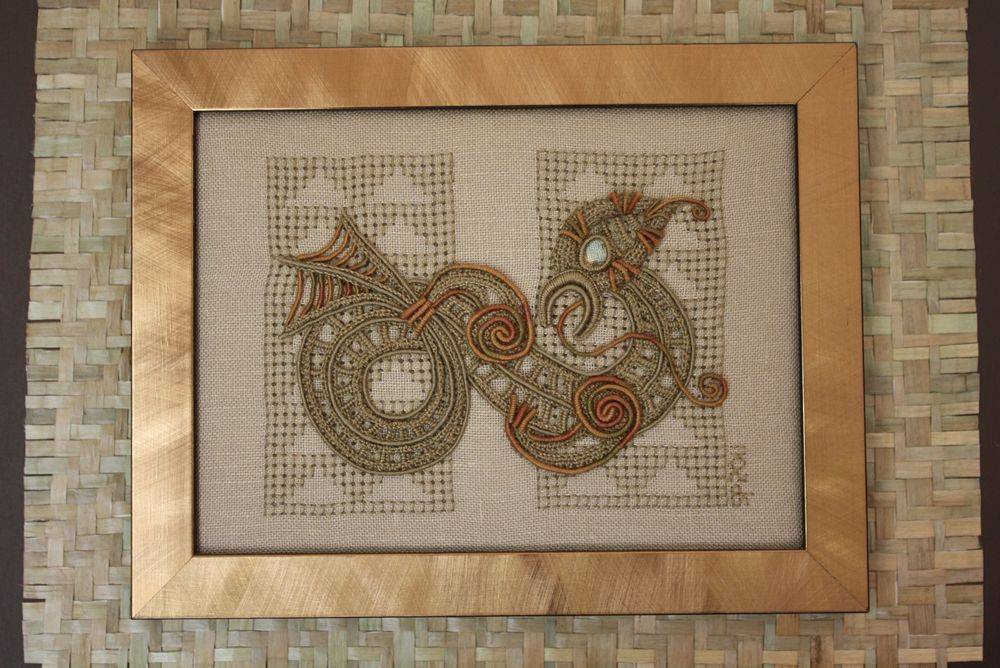 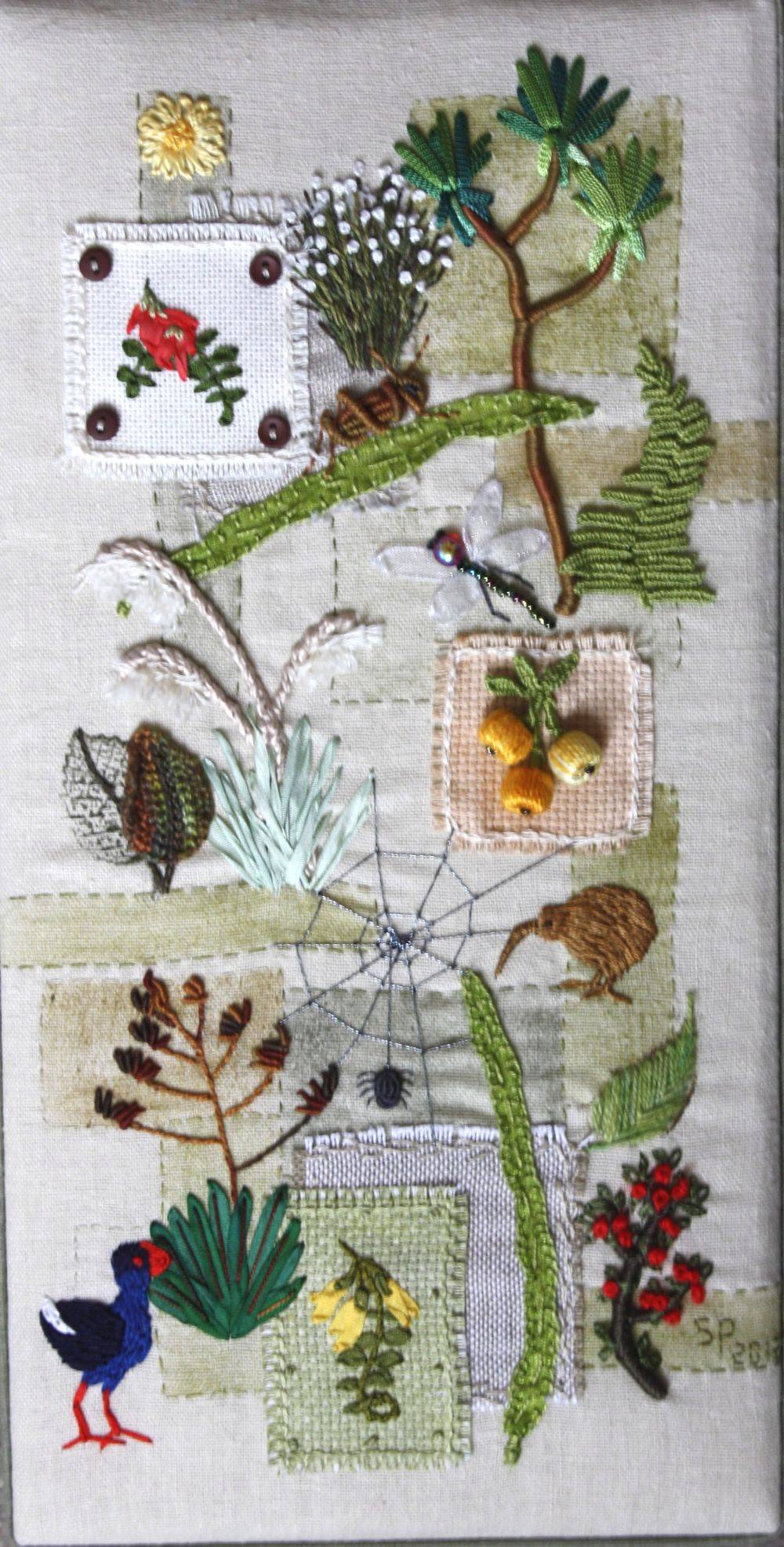 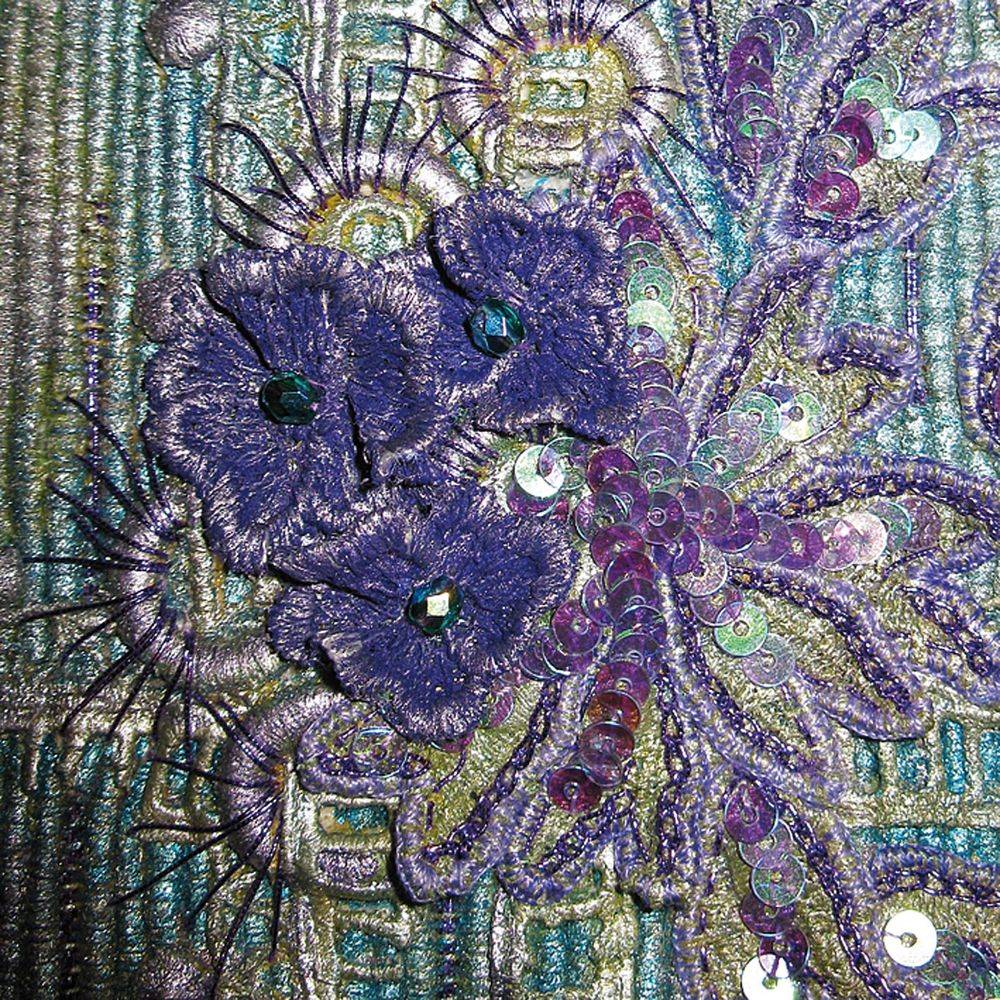 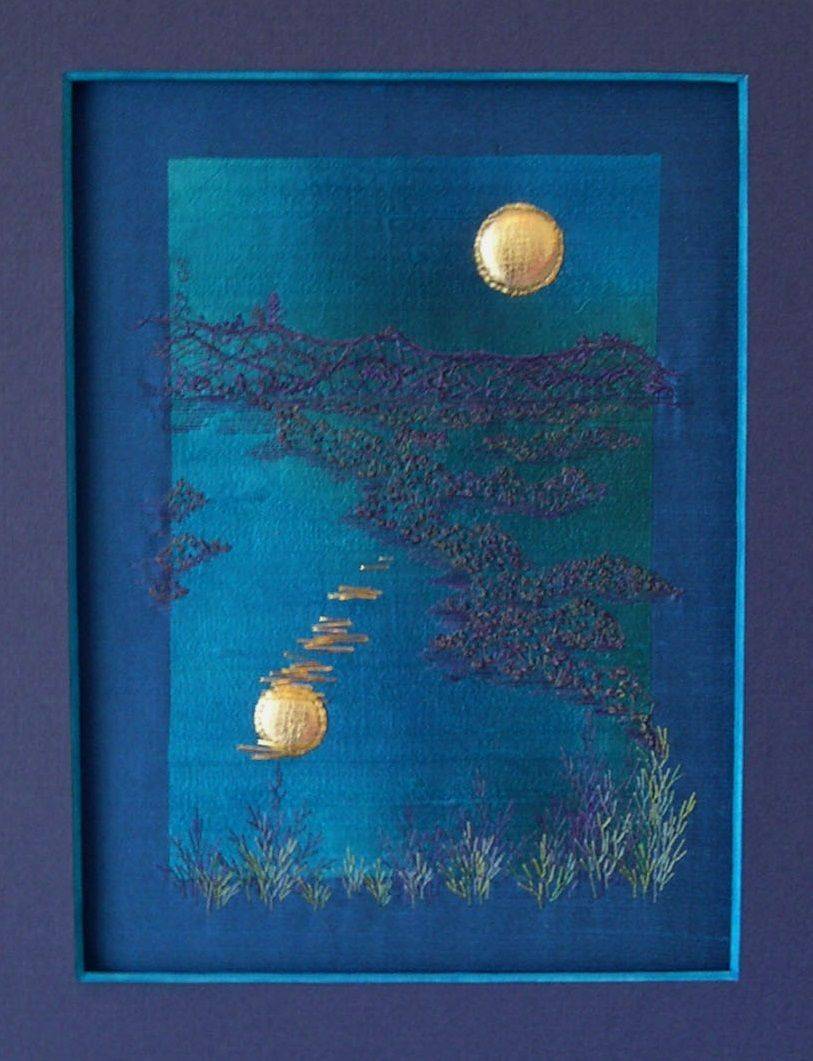 I joined the Warkworth Embroiderers’ Guild in 2000 and did every class that I could in order to see which aspects of embroidery appealed most. I discovered that I found creative work less restrictive and developed a love of colour, texture and more creative endeavours. After trying a number of styles, I did the ANZEG Certificate in Surface Stitch, followed by two further Certificates – Goldwork and Needlelace.

The interest in goldwork led to developing a love for working in metal threads and experimenting with Art Deco designs on artists’ canvas. I moved from Art Deco designs into metal embroidery in New Zealand designs which had more relevance for me. As well as working with metal threads, I have also worked in surface stitch and stumpwork, including  surface stitch on dyed fabric and experimental work using recycled materials ,paint and surface embellishment.

I won a number of  awards at regional exhibit​ions, and began teaching - first at guild level, then regional, and for the first time in 2008 at the National ANZEG conference .

In 2008 I took a class with Effie Mitrofanis on the technique of Casalguidi. This led me in yet another direction, developing Maori-inspired pieces which have similar geometric backgrounds to traditional Casalguidi pieces, as well as a number of mythology inspired pieces.

I began teaching a regular class in 2011 at the Highbry House Community Centre, and broadened the range of techniques I taught.

I began experimenting with different styles and mixing techniques, and in 2014 won 4 awards at the National Conference in New Plymouth, with the standoutpiece being my Clocklace - a small travel clock which I took took apart, and  suspended the pieces in a frame freehanging frame with needlelace stitched in wire. I focused on the completion of my Diploma of Embroidery, and Diploma of Embroidery teaching, both of which I finished in 2016. I also established ShirleyP Designs, and was a trader for the first time at the 2016 conference

In 2017 I was the travelling tutor for the Northern Region, and taught on my first International Cruise for Needlework Tours from Sydney to Singapore. In 2018 I taught on my second cruise, this time sailing for nearly 3 weeks, teaching 3 classes over 7 days, and sailing from Sydney to Seattle.  I was asked to be the travelling tutor for ANZEG - our National Organisation and travelled all over the country teaching at guilds. I did my 3rd cruise in 2019 - this time rather oddly flying to Sydney, to get on a ship that sailed back to New Zealand, and at the end of the cruise having to fly home from Sydney again. Unfortunately covid has cancelled most of my planned events in 2020 and 2021 - but I am hopeful things will improve sometime in 2022.